This past Friday a friend of mine invited me to a premier. An event I had never had the chance be a part of until that date: A launch party of a store in SoHo.

Launch parties take place all over New York at every possible time you could think of. But since I do not have too many friends who are in the fashion industry and who have invited me to something like this yet, I hadn’t had the chance to witness anything similar before. My friend had casually strolled the streets 2 weeks previously and stumbled across the designer’s store. After a nice chat with the store owner, who also happened to be the creator, she had then been invited to stop by at her online launch in the beginning of May.

This is exactly why Friday evening we found ourselves on the streets of SoHo, dressed up and ready to go. Lotus Hom has fashion that can be simple but also fancy. Some flower prints here and there – hence the name Lotus, which stands for flower in the Burmese language. The pieces are a definite eye catch and you won’t find sporty/casual wear among the dresses or pants. It is fashion meant for the feminine side of the female body and it brings this out through low-cut backs, wide skirts, or belts around the waist. The price range is anywhere from $100 a skirt to $500 a dress, accessories not included. 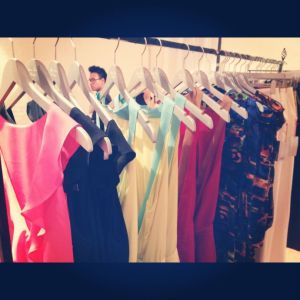 Mo Hom, the designer, greeted us friendly and asked us to eat and drink before looking at her collection. The food was appetizingly prepared in two different rooms. Some Burmese specialties were also found among the variety of cheese and sandwich bites they had arranged on huge plates.

A bartender presented to us the Neapolitan Cocktail, which is made of a mix of Baileys, Rose Vodka, and Strawberry Flavor. Mo is originally from Burma, so we met quite a few other Burmese friends of hers. People from the fashion industry, photographers, but also easy-going shoppers such as us were among the crowd. Everyone was asked to take a picture in front of the Lotus Hom wallpaper, to be posted online later. Most people ended up buying some cute accessories or an entire collection or a simple dress after looking through the rows and rows of clothing.

The party went from 7 PM to 10 PM and in the last half hour a group of Asian-looking girls wanted to take their last shot. Since I was in the middle of of it all, they pressured me to take a shot with them. The bartender asked us to first swallow lemon juice and then chug baileys right after. The combination might sound bad, but it tasted really good and I will most definitely try it out again.

At 10 PM punctual the party came to a close and we said our good-byes. Off to the rest of our night, which ended in different parts of Brooklyn.

Overall we had a blast and made a few new friends. I am also quite ecstatic to see which new creations Mo comes up with the next time. Her collection can be found online or at her store in SoHo at 262 Mott St.