The following was written for an online publication focusing on events and bars in the Village. However, since it was never published, I am claiming it and introducing to you one of my favorite German restaurants in Manhattan! 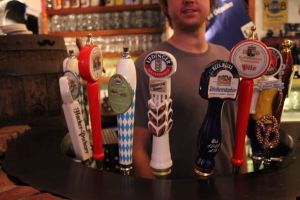 Waitresses serving huge beakers of beer in a dirndl dress. Musicians presenting German songs during another foreign holiday… These are scenes of a typical Saturday night at a rustic Bavarian bar in the Village.

Most New Yorkers are unaware of the fact that the East Village used to be home to one specific group of European immigrants: It was one of the earliest German settlements of New York and offered a solid ground for the upkeep of their cultural values. Unfortunately, a good deal of its German population was wiped out by a tragic steamboat accident in 1904. 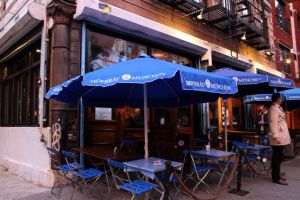 However, one little remnant of this little German area has remained until today. Just on the far end of the East Village in an area called Alphabet City. Located on the corner of East 7th St and Avenue C, it can be seen from far away thanks to the blue umbrellas und solid wooden tables outside. I am talking about nothing else than the restaurant and bar Zum Schneider: A traditional German place owned by the Bavarian native Sylvester Schneider, who brought some German flair into the furthermost Eastern part of the Village more than a decade ago.

12 German beers on tap, a menu featuring traditional dishes, and servers with the all-too-common harsh accent – it hardly gets more original than this. Not only does the owner speak German, but he wants his customers to feel transformed to Little Germany for a tiny bit longer than a beer and a dinner. So of course the menus are in German, the music is foreign, and the servers are bilingual.

Among one of the most desired dishes of the house you will find common entrées such as the Wiener Schnitzel, a breaded piece of veal served with potatoes and cucumbers. Another cultural must-have: Schweinebraten, which is roasted pork next to dark gravy, potato dumplings and a traditional Bavarian salad. But even the vegetarian will be delighted to come here, as there are meat-omitting food options, such as the cheese plate and a vegetable casserole. Both of these dishes are quite extensive in size and therefore great to share with a group of friends as an appetizer. Beware of the highlight on the menu no one really tells you about: The two dessert options! Two does not seem like a whole lot, until you have devoured the home-made Apfelstrudl and tasted the delicious Kaiserschmarrn. One of the best things of the Bavarian cuisine must be the sweet tooth they have!

Zum Schneider is one of the biggest participants of the German Oktoberfest, typically celebrating it from mid-September until the beginning of Oktober. Of course, Zum Schneider will always be worth a visit even after this time of year. Especially with the cold season and the holidays showing up. It is a great spot to try one of the best Gluehweine in town: Red wine served hot and mixed with spices such as cinnamon sticks, orange peels, and the ultimate secret ingredient. It is a tradition to drink this kind of hot wine during the winter and Christmas season throughout Germany and Sylvester was smart to introduce it to his innovation-seeking customers. Starting four weeks before Christmas at the end of November, the bar offers “Christmas Carrols” on the weekends, during which German songs are introduced to the bar crowd.

Maifest, Oktoberfest, Advent, and Karneval – these are all occasions to give the German side of New York a try. Where else than in one of the best restaurants of the Village? Prost!