Have you ever noticed how bright and sunny the world outside looks when you take your sunglasses off? I happen to do just that when I walk through Manhattan lately and wonder where my eye sensitivity to the summer has gone. It’s not that you really need your shades over here, so far up north, unlike other areas in the States.

The sun was pretty bright all the way across the continent in California, where I happened to spend a nice week exactly one year ago.

You see, my former roommate was an artist, a singer to be specific. She had been living in New York for well over 8 years and had built up her own little network of friends and people who could promote her in the music industry. Tucker was one of these. He had moved out to Santa Barbara and opened up his own studio. My roomie was determined to fly over and record her third studio album but she suffered from flight anxiety. Therefore, she asked me to be with her and hold her hand when her fear of flying overcame her.

So off to Cali I went, kind of happy to escape New York for a week after being here for three months already, and eager to see more of the US.
The flight wasn’t too bad, as we hopped over Dallas and landed in Santa Ana pretty timely. Getting out of this town to Santa Barbara proved to be more difficult, though. I had almost taken for granted how convenient NYC transportation to and from the airport was, so when I had booked my trip I hadn’t considered the difficulties of getting around the West Coast. The problems already started at the airport: We had the choices of either renting a car for 170 dollars, taking the shuttle to LA and then a train, or figuring out a way to get to the train station directly. Since we were kind of tired after 6 hours of flying and more hours of being on the road, and the time difference was kicking in, neither of us felt qualified to drive a car up to Santa Barbara. Not to mention the high cost for renting it at one place and returning it at another.

After one hour of discussing and becoming more and more frustrated, we ended up calling a taxi to the Santa Ana train station, where I made my first encounter with Amtrak. Amtrak is the American answer to the German ICE or other fast trains in Europe. Except for ours was going locally and took well over 5 hours from point A to point B. It wouldn’t have mattered really, if Amtrak’s air conditioning system wouldn’t have bothered us so much. After one hour we felt like we should have taken our winter jackets with, as two sweaters on top of each other weren’t enough to keep us warm. In addition to this, the people on Amtrak were weirding us out, as well. During the entire ride we thought we were in a badly produced movie about surreal worlds and creatures from outer space. So we focused on taking in parts of the landscape outside until it got dark and then we were just exhausted and cranky and ready to get off this ride!

Were we simply experiencing another culture shock? I don’t know, but the people in Santa Barbara seemed relatively normal to me. When we finally made it there, that is. And this is where the better part of our trip started:

Tucker, my roommate’s friend, had invited both of us to stay at his cabin and guest house up on Montecito mountain. It belongs to Santa Barbara but somehow not, and is surrounded by California’s beautiful lemon trees and other natural wonders. His family owned an area that was right beneath orange trees, lime trees, plume trees, avocado trees – everything you need to make your stay sound good. The first day we were exploring the area and found many exciting things. A lizard fled from us while we were picking lemons off the lemon trees in the backyard. The sun was smiling nicely with us as we sat next to the pool and ate self-made croissants and avocado dishes. The ocean was seducing us to jump into the cool Pacific water when we stopped by at the sea.

The days were long and there wasn’t much to do. Finally I had some rest after three very busy months. We usually got up for a swim in the parents’ pool every morning and then we made breakfast with hand-picked fruits and avocados.

My roommate and her friend drove off to the studio to get an entire day of recording done and I went to one of the fabulous beaches Santa Barbara has to offer. Occasionally I joined them for a session or two, but, honestly, if you are not doing anything than listening to a singer recording her works, the stay can be tedious. It is the same song over and over again for x amount of times and some parts are repeated right after each other for 20 times or even more. It was interesting to see how an album is being put together professionally. I was impressed by the great sound quality Tucker’s studio had to offer (supposedly one of the best ones on the West Coast) and flipped through some pictures of artists who had recorded here earlier. Mariah Carey, Katy Perry, and some other biggies had stopped by so far. We had missed Katy Perry by two months – it might have been interesting to get to know her. I think what it all comes down to, is that these people are surprisingly normal, earth-centered people when you work with them. They definitely don’t have much reason to act eccentric or snobbish if they are not surrounded by any cameras and just want to get their art done.

I was at the beach every single day and got quite a few burns which eventually turned into a decent tan – my very own California souvenir. The downtown area of this city is really cute with many tiny surf shops that are just waiting for you to explore them! The second day I was wandering around and I already heard a few groups of Austrian and German tourists – which somehow did not fit into this idyllic little community. But it was nice to hear a familiar language and to see what had brought them over here. There were many other Europeans roaming the streets, enjoying the beach, or sitting in a restaurant. I was positively surprised by Cali’s food and their freshly-made Mexican cuisine. Haven’t eaten better Mexican food until today: Tasty guacamole with spiced up tortilla dishes topped with cheese mixes or other goodies. They had different seasonings than they have over here and the ingredients seem to come straight from the origin, whereas over here they first have to be imported to make it so far up north. Another yummie experience: Seafood! Freshly caught and prepared in such a tasteful way, it was a delight to simply look at it!

The week went by very fast. The artist had wanted to stay for 2 to 3 weeks and I had already prepared for a flight back home, but due to the oak trees and the climate she had developed some pretty bad allergies which made her book her flight back on the very same day I was leaving.
So on our last day we were in a similar setting than we were on day one: Sitting in Amtrak on our way back to the Santa Ana. Because we hadn’t made it out to LA anytime during our short stay we figured we might have 2 hours time to see some bits of this crazy city. At the Los Angeles stop we spontaneously jumped out and went on a search for the city’s metro station. Bummer! I had a hard time detecting it at first glance, as it is considerably smaller than the MTA system. Then I was perplexed about whether or not I should care to purchase a ticket. It didn’t seem like you had to buy a farecard since you just went straight through the gates. Once or twice we saw a police officer patrolling the stations but on most occasions I think riding the tube without paying might be easy to accomplish in LA. Please correct me if I am wrong!

We spent two very short hours in the touristiest spot ever and discovered the stores around Hollywood Boulevard. At one point we grabbed a few Hollywood T-shirts for one dollar at a souvenir store. Matter of fact, I still have mine and always think of my trip to the West Coast when snuggling into it.

In general, I have to say that I really, really like the people in California. They are pretty warm-hearted and include you into their lives in such a natural way. It was a pleasure to be around these folks. This state is one of the politer ones and even though the people’s attitude might appear to be fake at first, I prefer this over East Coast rudeness and shoving people out of your way without excusing yourself. It made my day to be respected in the same way I respect others and having some funny small talks with random cashiers, people on the beach, or waiters in the restaurant. I feel that I am missing out on the main asset of American culture when being in New York and that is friendliness. 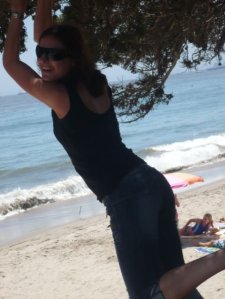