I can picture the look on your face! “Red Hook,” you might be thinking, “What on Earth is there to see in Red Hook?”
What, has this never been on your top priority list of things to do in New York? No?!

I hope not. The only reason fellow New Yorkers know of Red Hook is because of the one and only Ikea in this area. It can be reached via ferry from the Manhattan side and through a bus shuttle from Brooklyn (Queens and the Bronx are out of luck on this one!).

A coworker recommended I go check out Red Hook. Unknowing of the area, I decided to do this on a warm early fall day – just the right time to go take my camera for a walk and shoot some pictures of the neighborhood. The trip over there was already part of the adventure: I got in on 5th Avenue and 10th Street, after searching for the mysterious bus number B77, which seems to not be running from the Slope to Red Hook anymore. Then I asked a little boy next to me for directions to the “bars and restaurants” in that area and he looked completely overwhelmed. After I had turned away and silently cursed myself for asking a little boy of ten years, he tapped me on the shoulder and cheerfully claimed that there was indeed a bar right next to “his” apartment! What a goofball!
A young man’s fantasy certainly did not make me want to get off the bus, as the route goes directly through the “ghetto”part, which is an area filled with brown stones and prone to bad history. Poor boy, I hope he doesn’t have to be cautious of fights or prove himself every day he wants to get back into his place!

A stop later I finally got off, determined to check out that “culinary mile” in Red Hook my coworker had mentioned. But before getting lost for the second time I carefully asked some passerbys who looked at each other confusedly and then pointed me in the direction of Van Brunt Street. When approaching it, I ran past many cute houses originating from another century. The area is obviously geared towards family life, I would assume. Another drawback for especially younger people is that Red Hook is hardly reachable by subway, so you have to rely on an unsteady bus schedule or own a car (which most young people in New York do not have!).
Van Brunt Street is cute to look at even though there is not much to see. I think I came across one fisherman’s bar and one other restaurant. A cute wine shop had opened up along that area and hosted a cute selection of domestic and foreign bottles. 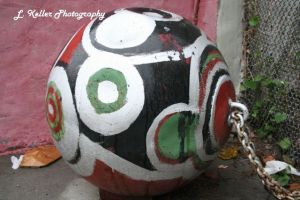 Since I was determined to prove that I hadn’t made the trip out for nothing, I just walked down Van Brunt all the way through to the end, past the huge grocery store Fairway, past some seedy looking smokers staring at their feet, and even past the notorious IKEA, until I came to a lovely harbor area. There was nothing to do here, not a store or a bar could be found, or anything else to walk into, but I had a nice view onto the East River and I also saw old-school New York subway cars in tram wagon style. As I drew closer, something rustled in the inside and all of a sudden a drunk homeless man staggered out of it. Yicks! Scared to death I ran off, down Van Brunt Street again, until I found the first bus stop.

Trying not to be discouraged by the past hour I had unsuccessfully searched Red Hook for a culinary highlight and still confused at where Red Hook’s flair lies I gave it another shot and asked a group of young people if they knew of any good restaurants in this area. They told me to take the bus with them until Columbia Street and then get off there.

So, Columbia Street is supposed to be another recommendation and indeed they do have a temptingly-good-looking Middle-Eastern, an Italian, and an Asian restaurant, but I am unsure if this belongs to Cobble Hills already or can still be categorized under “Red Hook.”

To come back to my previous first sentence: I came to Red Hook, I saw Red Hook, and I am still not impressed. Guess the general opinion is right: There is not too much going on over there. But don’t hesitate to hop off the bus earlier and explore Carroll Gardens and Cobble Hill, the neighboring areas! They are very awesome!

For a few more shots on Red Hook, go to A PICTURE EVERY DAY.