I was looking forward to two days of exploring South Iceland and seeing all the wonders this part of the island had to offer. What better way to do it than with GoEcco Tours? One of their tours was called “Catch the Ice” and it certainly had me hooked from the start. Could there be a better choice to get a true inside glimpse of the artic than by doing an adventurous tour of ice caves and glacier hikes? Indeed, it is a brutal fact that the ice is melting, the glaciers are decreasing and the artic is vanishing into nothing. Perhaps it’s best to get a hold of it all before it is too late to see much of the icy beauty this planet has to offer.

I was at first questioning whether or not we would be able to do the tour, since the blizzard had lasted well into the night. But GoEcco surprised (as so many times during this trip) when adamantly confirming the excursion and showing up with a giant Artic truck in front of Hallsgrimskirkja. Seriously, have you ever seen a more monstrous thing like this before? 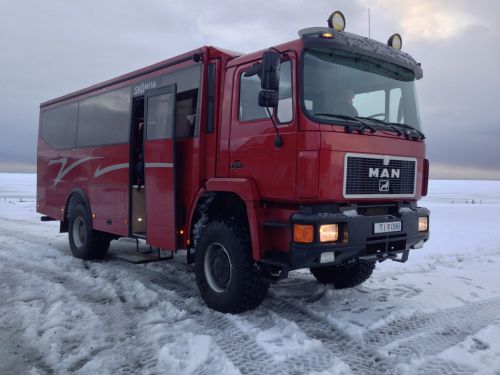 Thanks to this massive 4-wheeler, we were able to get to almost everywhere, at least as roads permitted (and sometimes further than that). Our first stop would have been the Batman cave – a lava cave deep underground. Unfortunately it was all snowed in so we couldn’t make it inside. We therefore checked out three magical waterfalls right after. 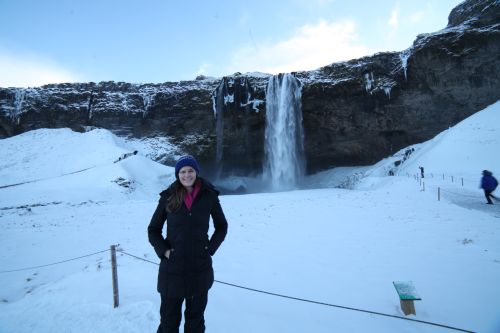 Our first one was Seljalandsfoss, perhaps the mellowest of all three. The previous tour had gotten stuck in the storm the day before (so they actually got three full days of adventurism) and we were waiting for them to hand over the crampons. Note: Crampons are the most useful things ever when exploring icy ground and ice cave terrain. Imagine hooking rubber bands with metal spikes to your boots and you get a good idea of how ice-resistant those shoes are. I still managed to scramble up closer to the waterfall and get a few pictures of it before receiving my crampons but after trying them I was hooked to them pretty much until the rest of the trip. 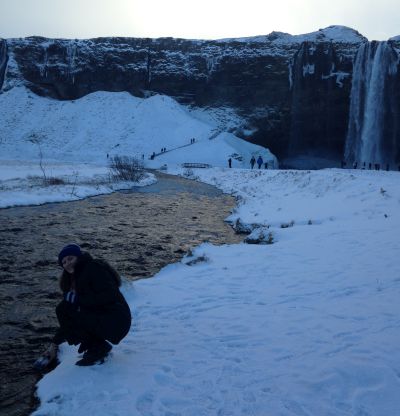 Our guide recommended filling up our water bottles here and at every other waterfall we visited. Yes, simply dipping the bottle into the freshest, coldest water which came straight from a glacier. Oh pure Iceland! My fingers were frozen for a while after but the water truly tasted like the best Mother Earth had to offer. 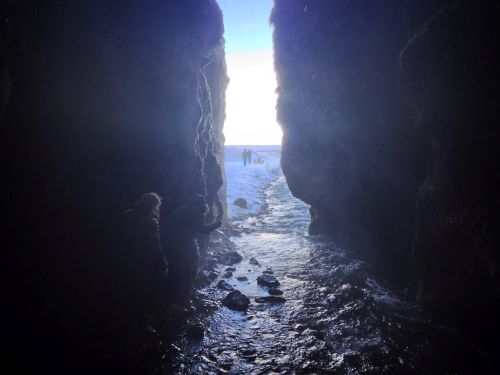 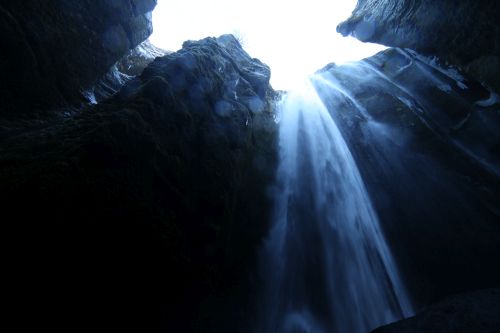 The second waterfall was quite special. Gljufrabui is hidden inside a cave and therefore also called the Secret Waterfall of the Elves. You have to wade through a short tunnel until you’re inside. A word of advice: Perhaps leave your expensive camera in the car if you want to use it later-on. I had brought mine and had a hard time rubbing it dry afterwards. There was literally water everywhere. It’s similar to standing in a room of pure humidity and being sprayed by water constantly. Nevertheless, this was a beauty to look at and the natural sunlight made it extra magical. 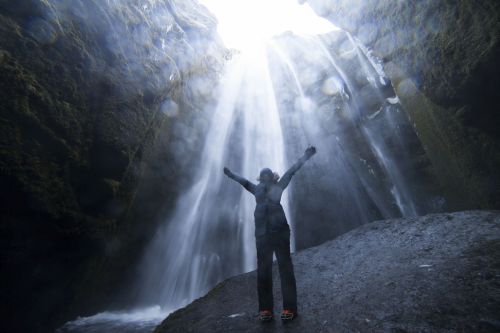 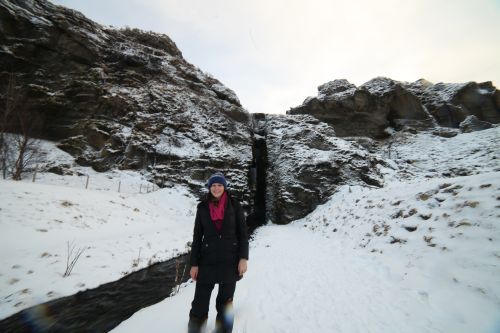 Skogafoss was the last one on the list. It was the highest of all and therefore the most interesting. You could also fill your water bottle up here if you wanted to. Or just stand next to the frozen ice and look up at the pouring water, wondering if you’ll ever see it without the ice and during warmer times. 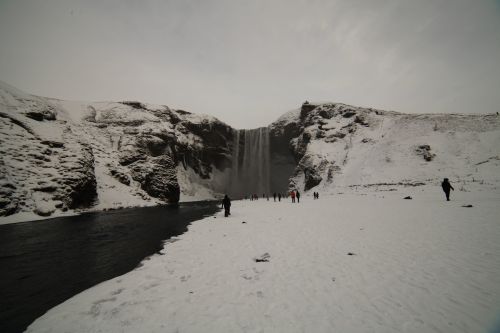 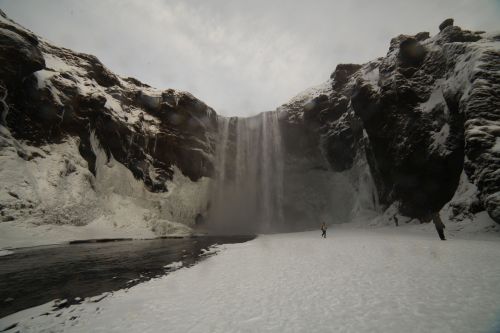 One of our last stops for the day was Reynisfjara beach: The Black Sand Beach and lava field. There is perhaps nothing more beautiful than parts of black lava stones peeking through the white snowcaps. What a contrast to even look at! We were warned to not go to close to the waters (as our guide had run to save an adventurer in the previous tour who managed to escape the high waves only by a hair’s breadth, if I recall his story right). The waves were indeed majestic and superbly high. There was also a frozen cave, at which the intimidating water clashed against. 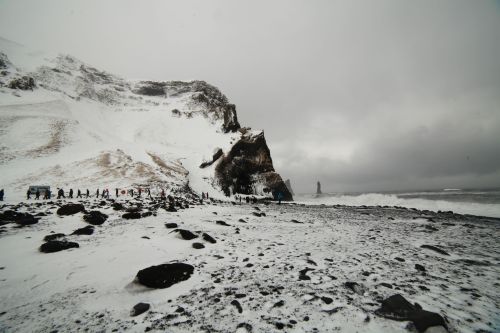 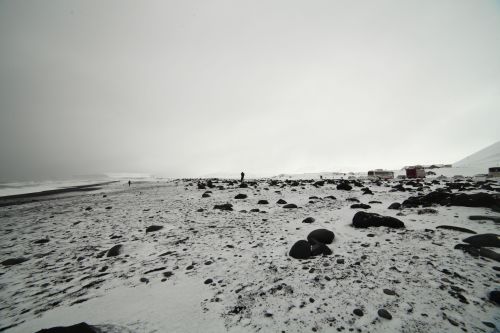 The day was drawing to a close and we ended the tour with a short excursion to the beautiful village of Vik, known for its tradition of making wool clothes. I even got to peek into the factory, although it looks fairly modernized these days.

The snow would just not stop falling and the flakes were streaming from the sky almost as madly as the night before. At one point to our accommodation, our guide hopped out of the truck and ran outside, while a few of us followed. As soon as we jumped into the snow, we sank in knee-deep. Artic snow heights are really no joke. The guide managed to get a grip on a huge chunk of ice, which we then transported back to our house. 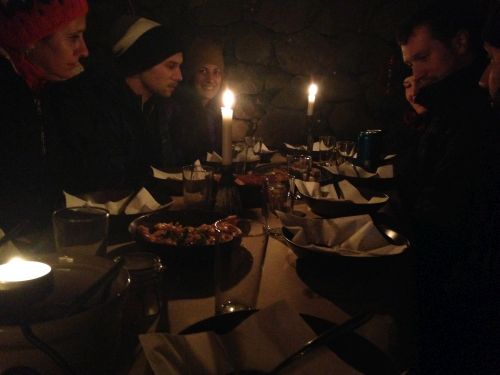 We were to stay in a couple of cabins and one big house for the night. Our accommodation had changed due to the weather conditions and I even had an entire room to myself (a luxury these days indeed). Our dinner consisted of pure Icelandic food and such exotic items as the inside of a sheep and other cold delicacies. I stuck to the vegetarian menu and had a great time with lentil soup and different types of bread. Although most of our group was exhausted from the first day, some of us managed to stay up until 1am (despite being woken up at 8am the next day). One couple was constantly chasing the northern lights and we saw them roaming the outdoors with their tripod during the full-blown blizzard. We joked how they could just wake us up with a loud scream in case they saw them. Everyone was a bit energized to finally see them and even more disappointed that we were unable to get a glimpse in the first few days we had been to Iceland already. 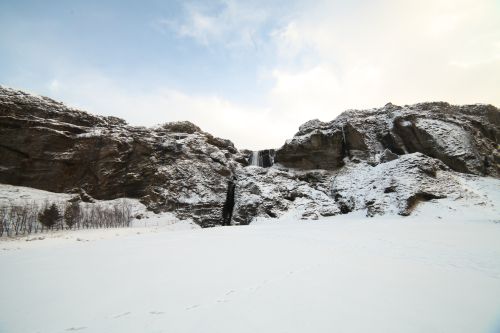 But just like everything else there on this magical island, its weather was indeed unpredictable.

One thought on “South Iceland: The Waterfalls, Black Sand Beach and a Homecooked Meal”