In September of 2014 I had the chance to travel to three amazing cities out west. In 9 short days I explored San Francisco, Seattle and Vancouver. 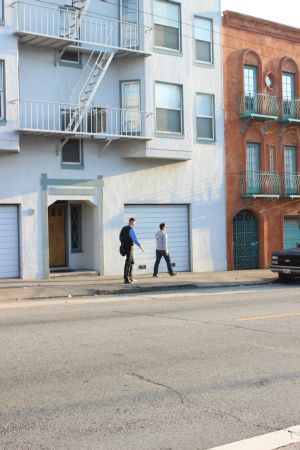 The first leg of my Three-City-Trip was the former city of the pioneers and gold rush. San Francisco had possibly always been on my list of towns to check out, although it wasn’t my first time here. More-so my first time as an adult. And therefore I barely recognized anything when walking around the hilly streets of the Bay area. I was able to discover the city on my own terms and that was exactly what I had been looking forward to.

My list of things to do had been quite extensive. From Alcatraz over the Twin Peaks to the Golden Gate Bridge – I wanted to see it all and experience most of everything. Perhaps three short days in town were scarcely calculated. I also realized that I hadn’t taken into account the fuzzy public transport this city provided .

My first impression after checking into my hotel was the high amount of homeless people. Or perhaps the number of homeless people out on the streets, smoking a blunt, and asking for food. I am used to crazy bums here in New York, who either scream at an imaginary person or who just tattle along, minding their own business. The homeless on the West Coast were totally different. They weren’t shy of striking up a conversation when walking by. I had to get used to it at first but when back on the East Coast, I missed how the homeless culture shaped their very special social system. I also got in the habit of donating my leftover food to them, since I wasn’t able to keep it in my hotel room for long.

So what to do in three days? Well, I first took the legendary BART from the airport to Union Square. It was about as expensive as people had forewarned me. For about $9, I sat on the train for 40 minutes while wondering how New York only charges a petty $5 on their Airtrain. I guess you get more bang for the buck in San Fran, since you have a great view and also nicer people around you.

After checking into my hotel in the Van Ness district, I was ready to do some exploring. I discovered that I was close to the Civic Center at UN Plaza, which featured nice statues and an array of homeless. My first day also took me to the Mission District and halfway through an industrial area in San Francisco. I was probably walking or taking the bus to almost anywhere and that was an interesting experience by itself. I bought a three-day-ticket for public transport and this included unlimited rides with the cable cars. I’d definitely recommend it if you’re planning on staying here for a short while, because one cable car ride by itself can already cost $6 whereas a three-day-ticket was less than $20.

The Mission District was certainly interesting, although half-deserted during the hot afternoon I visited for the first time. Luckily, I also got to see it on a bustling Friday night just a few days later, so my impression of it being a bit boring certainly changed. Altogether, I discovered some great Mexican candy stores, which reminded me of the great trip to Guadalajara in the previous year (in 2013). Indeed, there were certainly a bunch of taco places but also great Gelato, so I ended up getting some ice cream before heading back to the hotel.

I hadn’t really calculated in the effect that rush hour has when trying to take a bus from one end of town to the next. Therefore, instead of walking the Golden Gate Bridge, I opted to be dropped off by Fort Mason instead and to just stroll around there on my first evening. I walked past the Palace of Fine Arts Theater and was pretty impressed by the luscious sculptures and cultural institutions they had in that area.

Then I discovered the foggy beach and was absolutely thrilled. Since the mist was so thick, at times I could barely see more than 50 meters ahead. Randomly having joggers or other tourists come my way was an experience. I began to wonder if I would even be able to see the Golden Gate Bridge from here. No worries though, because when I finally go to aimed vantage point, only half of it was covered in fog. Indeed, even throughout the next few nights, I didn’t have much more luck in seeing a fogless bridge. When telling my friend about it who grew up nearby she laughed and said I would have to be really lucky to not see it fogged up one night. Well, perhaps I get to experience it at one point in my life (and I am counting down the days to that!).

The first half day and evening had been quite an eerie experience. I was looking forward to the next two days and exploring the city during its golden hours and sunshiny times.

One thought on “San Francisco Day 1: The Mission District and Some Golden Gate Magic”