Twice a year an occurrence happens here in New York. It’s so magical and fast, that sometimes it’s incredibly easy to just walk past it and not pay attention to it. Manhattanhenge occurs 3 weeks before and after the summer solstice. Roughly at the end of May and beginning of July, the sun aligns perfectly with the grid of the streets in Manhattan when it sets. A full body of sun can be seen on 14th, 34th, and 42nd street on these two occasions during the summer. Just one day later, a half body of the sun can be captured at the same locations.

Of course it took me a while to catch up with this phenomenon. I first heard about it the second year I was here and then I didn’t pay much attention to it. It was only until the past few years, when I kept missing out on it that it become almost an obsession. Will this be the year I will see the fantastic Manhattanhenge? I asked myself. And yet, it took up until now, July 2015, to finally catch and capture it.

I did miss out on it in May 28th. So of course I thought I would have so much more time until now. Right? Wrong! Because time just flies by. If I hadn’t weaved through a few articles online, I probably would have missed out on it today, too. But luckily fate wanted me to be a part of it – finally!

I had planned on meeting with a group on a street overpass close to Grand Central. Instead, my train was delayed, leaving me with almost less than 10 minutes of time when exiting the subway at Times Square. After passing Bryant Park, I simply gave up on the idea of making it out to Tudor City. I set up my tripod in the crowded street on 42nd street and starting shooting away. Below you can find a few of my hastily thrown together captures. I tried dodging others who were pointing their cameras right in front of me. But perhaps that is also the appeal of Manhattanhenge – everything stops for a short moment and you can see crowds of people in the streets, trying to capture the red sun. It literally only took 4 minutes and then it was over. But those 4 minutes were certainly worth-while. 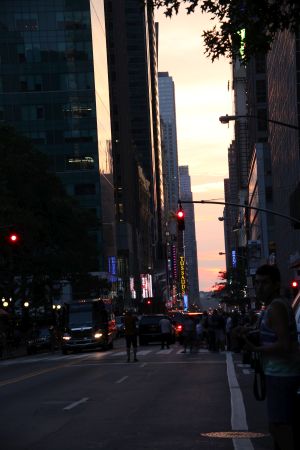 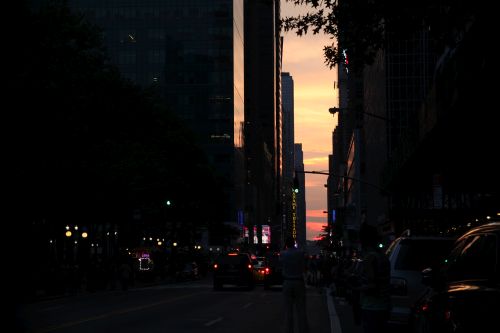 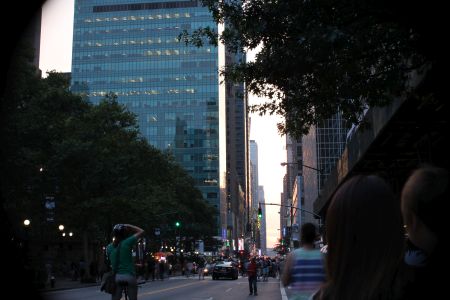 Tomorrow is the last time you can catch Manhattanhenge. It will be a half sun on the street grids, but nonetheless I am sure it’s still pretty. Make sure to be on location in time unless you want to be stressed out about the picture. And don’t forget: This is a memorable group experience, so don’t be too annoyed by people standing in your way!

[Author’s Note: I captured my images on a telephoto lens (200mm). Technically you can capture it on your smartphone, too, of course. But the extra zoom made it easier to take some great candids of the street scene unfolding ahead of me, although I did miss out on the full-bodied sun. Oh well!]