Spending 48 hours in Roma, I was hard-pressed to find some interesting things to do and not waste my time on things I was not so keen on doing. From people declaring me outright crazy to the hostel owner who tried to give me a good overview of my “way too short” stay – I am forever thankful for all the input I received. And at the end of my time, 2 days in Rome turned out to be quite fabulous!

I also found various guides, which helped me a lot in getting my days sorted out. Find more information on How to Spend Two Perfect Days in Rome (Forbes), Rome in Two Days (Tutorisma) and 48 Hours in Rome (GoItaly.com). These even included lunch options, which was great, although I barely took advantage of them. I did however appreciate the evening dinner suggestions. I also found that I had a lot of time to explore other things, because the pace I was going at was a bit faster than suggested.

Where I stayed: Neki Hostel

Searching for a hostel in Rome turned out to be an almost nightmare. Not only did I deal with tons of inflated prices but I also had a hard time finding something in a decent area, from which I could venture out into the city. Neki Hostel was amazing, once I found it! Most advice I’ve gotten was to stay away from Termini Station and I have to say that is some good advice. It turns into a seedy pot at night.

The general idea behind Neki Hostel: It is a residential apartment converted into hostel rooms. Great idea for future business owners, I’d say. Not sure what the laws in Italy permit but if you’re able to pull it off, go for it. In addition to its great flair and amazing owner it was also in a great location: Perhaps a 20 minute walk from one of the oldest establishments – the Colosseum!

The Colosseum! After dropping my stuff off at the Hostel, I went ahead and walked up the road to one of the most impressive man-built installations. Hard to believe that this building is more than 2000 years old. Not to mention the surrounding fundaments around it. Lots of selfie-stick sellers and other vendors. I even got hit in the head by a Roman solider impersonator, who thought it would be funny to bounce his plastic sword off my head.

To get inside only took 10 minutes, really not bad at all considering the line looked way worse. I was able to take advantage of the Roma Pass here so entrance was free for me (otherwise it would have been 14 Euros). I strolled around the first deck and tried having a picture taken of me without anyone else’s head in between. A task that proved really hard, since you are literally cooped in with all the tourists. I’ve never seen as many tourists anywhere, not even in Times Square, and became annoyed quickly. I guess I am just not a person who loves the masses. I then went ahead to the second deck and took in the great view.

Off I went to the Foro Romano. I decided against standing in line and strolled past it (which gives you a great clue of what it looks, like, too) when walking over to the Piazza Venezia. It is here where you will find a great monument, white steps, and amazingly elaborate statues. Beware of sitting on the white steps, as a guard will drag you off almost immediately.

The next task was to find more sights in the inner city, so on my way to the Pantheon I strolled through small streets and of course managed to get lost once again. Somehow I made it to the Trevi Fountain (which was under construction) and also some national parliament building called the Quirinale Palace. It is supposedly equivalent to the White House, as the current Italian president resides in it. It took a few steep hills and bends around curvy corners to make it there, so I have no clue how I ended up here. At last, I got to take the subway to the Piazza di Spagna, the Spanish Place with the Spanish Fountain. It is here where you will have glorious views of the city and where you can walk up and even sit on steep steps to take in a great sunset. That’s exactly what I did.

I then continued on doing some night photography close to the Pantheon until I finally settled for dinner at a restaurant around it. Here again, buying an entire carafe of vino was almost cheaper than bothering with a simple glass of red. I didn’t quite finish the wine but gave it to two German tourists sitting right next to me, who were pretty thankful.

I then strolled past the now dark streets and cherished the moments when tourists seemed to be getting ready for bed or weren’t out on the streets anymore. This was actually the only time of day I felt I was starting to appreciate Rome. I guess standing next to selfie-stick families or teenagers kinda did it to me. I also did not appreciate vendors constantly chasing the tourists so that they could get rid of their cheap stuff. But night-time changes almost everything and I had a pretty good time when I was out by myself and enjoying the peace. The small streets look pretty solemn in the shine of lanterns and lights.

How to Get Around:
I found walking quite easy but only if you have the right shoes. After the first day of walking around in ballet flats, I dealt with a pretty painful foot situation. If anything, subway rides are quite feasible, especially if you have to go larger distances, such as moving across the river to the Vatican. I did not have the opportunity of trying out the bus system but it seems like they run quite late. Subways run almost always, 2-10 minutes apart, depending on the time of day. Even late at night, the wait was never longer than 7 minutes. I am not sure if it shuts off at one point. Staying in an easily accessible area in Roma certainly helped when planning a route for all the sights. 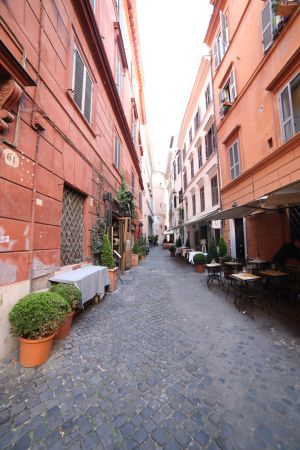