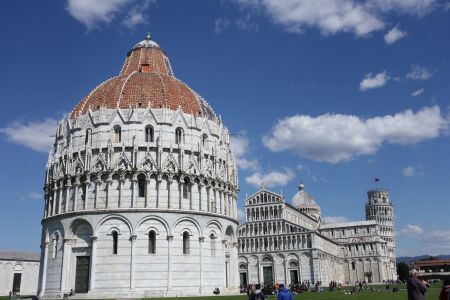 First stop in Italy: The amazingly small town of Pisa. When taking advantage of Ryanair flights, I saw that getting in and out of Pisa seemed like a pretty uncomplicated procedure. I was planning on spending some time there and then taking the train to Florence, Seeing that both were only one hour apart made things pretty easy.

Getting from the airport into Pisa was feasible by means of bus. Don’t take advantage of the 5 Euro bus ticket everyone wants to sell you once you get off the plane. Instead, simply walk to the info desk and purchase a ticket for 1, 20 Euro, that serves the same purpose and costs 5 times less.

I knew I wanted to check out the main attraction, which was the Leaning Tower. A bus went directly past the train station, over a few bridges and to the attraction. It took less than half an hour altogether, which was great considering that I only had a few hours of time. I was let off right outside and wasn’t sure if I was at the right spot at first. But then I saw hordes of tourists trekking towards the gate so I figured I’d just follow them.

Unlike my imagination, the tower was not standing by itself in the middle of nowhere. It was rather surrounded by other churches and a cloister and thus was a part of some complicated variety of other faiths.

I got to snap my Leaning Tower picture, sunbathed in the grass in front of it but then eventually went on to see other parts of the city. It takes around 20 minutes from there to the train station, which was where I was hoping to catch the train to Florence. People were out and about, eating ice cream and doing some solid window shopping. The bridges were gorgeous, and overall the city is worth a daytrip because of all the quaint little streets and other historic parts.

Sometimes the vendors were a bit reserved, but once I got to ask them for directions and show my genuine interest in the city they became friendlier and pointed me in the right direction. It must be odd to be part of such an overly touristy city when you are just trying to have your own business. But as I got to know Italia better, I saw that many towns thrive on tourists only, especially in the oncoming season.

I waited about an hour at the train station, because I had missed my first train. The ticket to Florence was around 10 bucks, so really not too bad, at all.

Piece of advice: Watch your bags while on the bus and train. The bus driver couldn’t believe how careless I was when entering the bus and warned me multiple times to always be wary and keep an eye on things. That was pretty nice of him to do but luckily nothing major happened.

5 thoughts on “Spending a Day in Pisa: The Leaning Tower and More”