Every time I go back to Germany, I also make a point in visiting the beautiful town of Heidelberg. Since I studied and lived here for a while, I have remained in touch with quite a few people. It still surprises me that I am still friends with co-workers, study buddies and roommates after being abroad for 5 long years. I really only managed one full day in this city (the other one was spent in a town nearby), but I re-connected with my old roommate, who now lives by herself in an amazing location close to the Bismarckplatz. How times have changed – we are now able to afford having a very different lifestyle from the one we had as poor students in a 6-bedroom-apartment in Kirchheim… 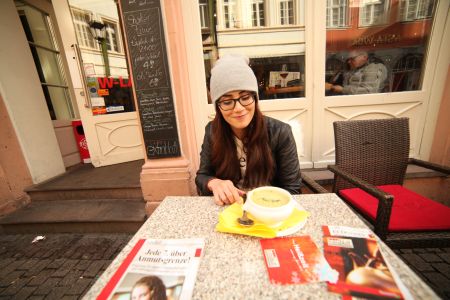 The roomie and I met up in the old part of town and walked our way up to Café Extrablatt. Here we devoured some amazing soup and I managed to get some pasta, too.
After our lunch and catching up with each other’s lives, we went on an extensive sightseeing tour. Heidelberg has the longest shopping mile in entire Germany. The longest, not the biggest. It certainly is among the most beautiful, as it has many little boutique-type of stores in addition to the big names. It goes on for about 2 km, so we just followed it up to its end. Past the old churches, the Marktplatz, the beautiful fountain, and the Rathaus (similar to city hall). We stayed away from the beautiful castle this time, but trekked through old streets and went all the way to the Karlstor, which is pretty much the official end of the Altstadt (old part of town). In the summer, lots of open-air-concerts are being hosted here, so if you’re ever in this town at that time, you should check it out! 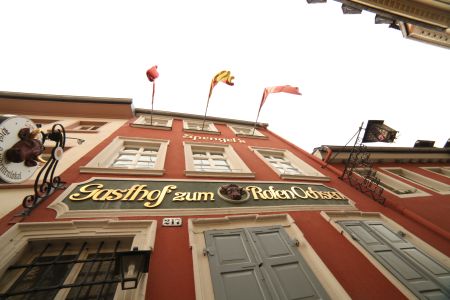 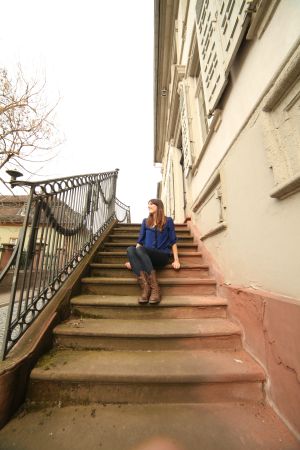 We then grabbed coffee at a new spot called Zimmer, Küche, Bar (room, kitchen, bar in reference to room, kitchen, bathroom – which is a common real estate term in Germany). The service was a bit slow but the cake was sweet and hit just the right spot. It’s located at the Marktplatz, together with a multitude of cafes, bars, and restaurants. It was that time of year where everything starts to move outside, so lots of tables were moved to give the customer the ultimate outdoors dining experience. Oh how I love just sitting outside and enjoying a good meal with a nice drink. Of course, Germany allows for alcohol at any time pretty much anywhere. Unfortunately, as we found out that day, it also still allows for smoking indoors in certain pubs and restaurants, which was really a great turn-off for us when seeking out a nice spot to sit at. I suppose some things will never change.

Since I knew I wanted to get a night photography session done, the roomie actually stuck around till about 10pm that day. We went to the Old Bridge (Alte Brücke) to start photographing on my tripod. Or rather, I was snapping some fine art and she was snapping pictures of me. Heidelberg had always been on my list of cities to accomplish in when photographing the Blue Hour and at first I thought I wouldn’t have enough time since I was only there for such a short period. But I somehow made it happen and I am really happy that I managed to squeeze it in. Also, kudos to the weather holding up. We basically backtracked our steps, and I ended up finishing my session at the beautiful fountain at city hall.

Needless to say, Heidelberg has and always will have my heart. There is a popular saying which alludes to “Lose your heart in Heidelberg”. There is even an entire song on it and you can buy student-kiss-inspired chocolates throughout the city. It has such cute vibes and its small streets are just amazing to walk through. I’d recommend visiting the Altstadt, because there really is not overly much going on in the rest of town in terms of sightseeing.

For my previous posts on Heidelberg go to:

HeidelBERG not HeidelBURG
To Lose Your Heart in Heidelberg