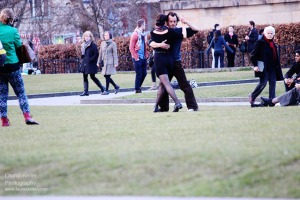 Of course the weather was crappy, no surprise there. But in the very last days it finally turned better – much better. For two days Berlin was as warm as 20 centigrade (70 Fahrenheit) and that made it all worthwhile. But even walking around in the rain slush the first two days wasn’t that bad. I had truly expected worse from so far up north, especially after being hit by snow the first week I was back home!

So by the time we got to the dome, it was peacefully sunny and people were bathing right next to the fountain, which had mysteriously turned on. We even got to see a pair of tango dancers performing right beneath the dome with a group of friends. Berlin certainly withholds creativity, so much to that. When strolling through the streets, we passed landmarks such as the Rote Rathaus and the Marienkirche – a well-known church with a clashing history of Catholicism and Lutheranism.

And then, finally, we stood in East Berlin: At the Alexanderplatz, where trains come together, trams meet, and subways emerge. It was a bustling center of eager shoppers, street kids with dogs, and tourists snapping pictures of the World Clock. Certainly one of the busier spots in the city, I would say. After this, we dropped by the Radisson Blu Hotel to view the Aquadom – a gigantic aquarium my friend had always wanted to view on her trip to Berlin.

Saturday night was party time and my first disappointment since my arrival: No glamour in Berlin! Just when I was about to sort through my party dresses and look for fancy high heels, my friend mischievously pointed out that no one dresses up in Berlin but rather tries to dress down. Meaning Sneakers, Shirt and Jeans time. I couldn’t believe it. A city without glamour? Well, it truly exists and it’s called the German capital. I still wore fancy things and was one of the only ones when we went to a house party in Friedrichshain (not without spending 2 hours in the Berlin subway and being distracted successfully by an array of things).

The new in-drink of Berlin? Mate – a common drink made from dried herbal leaf from South America, mixed with anything alcoholic. So after a few Vodka Mates I couldn’t think too clearly but we certainly went to an “underground” club in the middle of nowhere called Rummelsbucht. It was here that we needed a password to be let in and spent over an hour waiting for the doors to open. Since it was supposedly very crowded inside, they only let the crowd in slowly (and a good amount of people were denied access). We weren’t a big fan of neither the audience nor the music and after an hour we simply gave up. Partying in Berlin – so far my impressions are rather mixed. And I am not sure I like the no-glamour thing they have going on!

Then, on one of my last days, I got to see Kreuzberg – the former hood which has now been converted into a nicer area (at least in some parts). My friend from Berlin claims that in other parts it still is pretty dangerous but where I met up it was more like a hipsterized version of a nice neighborhood. The sun was shining, people were strolling along the Spree, and we dropped in for a coffee at a café whose bare existence oddly reminded me of Park Slope or Williamsburg or anywhere else in the world. Except for the prices, these were still pretty low. But then we turned a corner and all of a sudden there were 6 police cars parked in front of an apartment building. The traffic had come to a standstill. There was surely something wrong going on but what it was remains a mystery to me.

Overall, I have to say that Berlin does not appear to be as international as other European cities. Compared to Paris and London, the only foreign people I saw were Russian and Easter European tourists mixed with French, Dutch, and British folks when standing in line for yet another sightseeing highlight. True, we did stop by at this coffee shop where the waitress only spoke English. But I had somehow imagined it to be more crowded with an underground scene of starving artists coming from everywhere, especially New York. Where were all of those Hipsters who moved from Wburg to Germany just to make a living off of under-the-table-work? It certainly felt more like a German city to me than anything but perhaps my expectations where mildly exaggerated…

On top of this, I encountered a few Neo-Nazis who were walking through subway cars. I didn’t like this – at all. Up to that date, I’d only had the pleasure of seeing the skinheads on German news whenever there was yet another political demonstration. So close to Eastern Germany it was just a matter of time to witness them in action.

Other than the aforementioned knicks and knacks, Berlin seems to be a creative city, no sweet talking here. Be it students filming a project for their school or street musicians performing art underground and above – I can only imagine what artistic vibes will ring through the city once summer comes around. Collecting bottles out of trash cans seemed to be yet another hype throughout Germany but especially Berlin. Heck, for 25 cents a bottle I think I’d start doing the same if I needed money. And all this behavior kinda fits the general casualty you witness throughout the city.

And that was it, my time in Berlin. Short, necessary, and mind-enhancing by all means!

[For more pictures on Berlin, go to Days Spent in Berlin (3).]