Another storm has entered New York. This time in form of a blizzard. Heck, we haven’t had a blizzard in over 2 years! I had almost forgotten what real snow looks like until I left my apartment this night.
Crunchy white mass sticking to my shoes, flakes melting as soon as they touched my cheek. Snow in the Big Apple – it’s been so long. 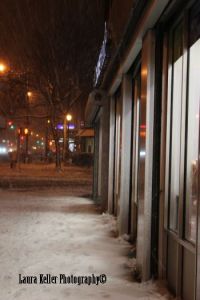 And while in the season of 2010/2011, we had two real snow days (snow days meaning days off work due to snow storms), today we had to work until the bitter end. Despite the weather forecast texting our all cell phones yesterday afternoon (Bloomberg must have paid an exorbitant amount to make sure every person in the metro area was well informed of the current conditions!), not every company allowed their employees to leave early, least to say, stay home on Friday (today).

It surely was not as bad at 5 PM but it got worse and worse until the constant flow of snow came drifting out of the sky. And still is. Most likely until tomorrow.

These pictures were taken while walking around Park Slope just a few hours ago. Enjoy!

4 thoughts on “Nemo Flaking Its Way into New York”