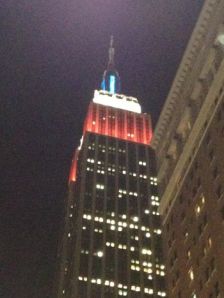 Today is the day. Today is a very special day. Not only for New York. Today is different for the rest of the world as well. There aren’t too many of these days, come to think about it. But for some reason everyone I’ve known can recall where they were when the catastrophe happened. Exactly on this date 11 years ago two airplanes piloted by Al Quaida crashed into the towers of the World Trade Center, causing both buildings to collapse and burying more than 3,000 victims in the shards of the unthinkable. The stories, the documentaries, the recapses – all of this took years of processing until the world finally knew the truth. Or rather the details of the circumstances.

I still remember when I heard about it. It was exactly 3:20 PM in Germany, when an announcement on the radio caught my attention. I was 14 back then, occupied with doing my homework at my desk. At first I couldn’t believe that the collision had indeed occurred. When I walked downstairs to our TV and saw the live pictures, it started sinking in that something horrible must have indeed happened. We still went to choir as if nothing special had come about. But that Tuesday will always be engraved in my memory.

And when I moved to New York, I was under the impression that this city must be holding this one day in a very special memory. Two years ago was my first 9/11 in New York. I was excited to walk through the streets and see what was going on. “What do you expect to see?” my former roommate asked me. “There will certainly not be a parade to commemorate the 3,000 people who died in the collision!” True, perhaps I had expected just that. A joyful parade or a mournful parade. Pretty much anything that involves a lot of people sharing their thoughts on the event.

I was severely disappointed. A band was playing at Bryant Park. The chapel in the Financial District had more than the usual amount of visitors. But that was pretty much it. No evening ceremony, no group of people hunched together, no national anthem. It could have been just another normal weekend day here in Manhattan. And then last year, even though I wasn’t here, my friend told me about unexciting occurrences happening throughout the city on the ten year anniversary. True, Obama paid Ground Zero a visit and opened up the 9/11 Memorial (read more about it here). A few press had gathered here and there. But still nothing too special.

I am starting to believe that people from outside of New York hold this day in different memory. They mourn it, they talk about it, they openly discuss what can be discussed from so far away. Everyone thinks that this city will make a big fuss out of that one day in September. But they were not here and the date is easy to forget if you are not surrounded by the ruins daily, when you are not close to the site of demolition.

So today, while I was working and walking around, I started to realize: This city will never forget. And it is surely not ready to forgive. 9/11 is not held in thought publicly like Memorial Day or other sad occasions. It’s been 11 years. The deceased still have family and loved ones they left behind. The wounds of this particular date gape wide open, as was seen in personal pieces exhibited at the 9/11 Memorial. Or the heartbreaking engravings of the deceased at the two ponds.

People lost their husbands, their wives, their sons, their daughters, their fathers, their mothers, their siblings, their friends – in short: somebody who meant a lot to them. So while the rest of America updates their Facebook statuses with the national flag and tips its hat at the shocking occurrences and the yearly anniversary, New York is silently mourning. It is grieving the loss of not only the people but also the significant landmarks. The jobs and the dreams that were connected to the World Trade Center. The tallest buildings of the Big Apple, the Financial Twins, and Yamasaki’s most famous creations.

No, this city is not able to forget and, least to say, heal. Every year so far I have seen more and more ads when taking the subway. These advertisements picture people who have health problems because of the pollution done to the air. Asthma, panic attacks, minor intoxication – just a few of the smaller issues that have turned into bigger ones over the years. While the rest of the world shuts its eyes for 364 days of the year and remembers the day only once a year, New Yorkers have been living with the tragedy and its side effects ever since. Even people like me, who are not natives to the city and who haven’t been around when it happened, can feel that no one is in the mood to talk about when the topic arises.

So I went on top of the Empire State Building today. I wanted to see how the Freedom Tower fits into the Manhattan skyline and I wanted to take the City in on this exclusive day of the year. A few hundred other tourists thought the same, but I was not bothered. It was nice. And while I walked towards my apartment in Brooklyn, I saw the Freedom Tower point a very strong light beam into the sky. The blue ray illuminated everything. I couldn’t help but think that this is New York’s way of remembering 9/11: Through the dark there shines a light and touches everything and everyone around it. While this city has been touched and will be touched in further decades to come, it will never forget that one day in September when its two twins were crushed eternally.

Where were you when it happened?