Going back to work on Monday was a bit awkward after the Friday happenings. Last week a supposedly disgruntled employee had shot his coworker dead and then was part of a gun fire that occurred right in front of the Empire State Building. All of this happened at 9:04 AM on a so far eventless morning.

“The start of just another Friday in the City”, is what most people must have thought while on their way to work.
“An exciting day for having a great view of the Big Apple” must have been the conceptions of the average tourist traveling out to our renowned platform.

I still remember it quite well. At 8:56 AM my coworker came inside the building. She was almost half an hour late to work and breathless. “I woke up at 8:40! No idea how I got ready but I took a cab over here from Hell’s Kitchen!” she exclaimed while rushing into the office.

Then, around 9 AM, another girl and I heard noise coming from outside. We are located on the 27th Floor but when the window is open you can still hear quite a bit from the traffic and sirens echoing through the streets. An image of gun shots flashed through my mind but I was quick to dismiss it. “Must be another movie they are filming in front of the building” I thought. My coworker dismissed it as construction sounds but we still managed to glance at each other for more than a few seconds, a worried expression on both of our faces.

Just ten minutes later the building intercom went off and a voice announced a “situation” on the 27th floor to which no one should react to until further notice. This happened to be the floor we were on. I poked my head out of the office door to see what was happening. Just in time to catch a building employee hurrying past me. He glanced back and managed to encourage me that everything was okay and I should not go downstairs. I wondered what that meant.

At the same time all of this was going on, another coworker was fixing up an ID at the downstairs security. He called up to our manager, telling him that it was believed 6-7 people were shot in the lobby. At 9:20 AM he was back upstairs, shaky but still able to tell his story: All doors had been locked at the first noise of the gun shots. It happened outside but had been heard in the lobby, which had led to his initial misperception. Everyone believed a madman had gone wild and had randomly fired his gun at passerbys.

We were all shocked at once but then remembered the noise going on just after 9 AM. Both me and the girl looked at each other and knew what we had heard. We started realizing that this incidence had unfolded in a matter of minutes and that the girl who had come in shortly before 9 AM had possibly been very lucky.

The velocity in which the news travelled during this morning still blows me away. FOX had a reporter close-by and she posted an initial story about three people being wounded in the gunfire, right outside the Empire State Building. Everything seemed to have occurred at 34th St and 5th Avenue, which is a common entrance for tourists and also ticket vendors. It was horrifying to think about the fact that my coworker seemed to have just evaded the entire scene: She had been buying breakfast at exactly this area only ten minutes earlier.

More news came trickling in. A friend texted me around 9:30 AM, saying her mother had given her a call and informed her of the shooting. The stories circulating the Web ranged from anywhere of 1 to 5 injured people but that was yet to change in the future. I am still amazed at the speed of how everything was delivered, the high amount of eye witness reports that were immediately released and of course tweeted pictures of the victims that should have never been circulating the Internet.

More and more friends grew worried and communicated via text. Even our customer service department started getting calls from clients who wanted to know if we were alright. The building sent off e-mails permitting people to exit the building but not to re-enter. We were all in a rather confused and shocked state of mind and tried to get over it by talking it all out. Many co-workers were on the phone with family and friends. It must have been a chaos downstairs.

Eventually, the news of what exactly happened came through to us. Mayor Bloomberg gave a press conference outside and outlined the events.

At around 12:30 PM it was permitted to enter the building again but only with an employee ID. Everything leading towards 5th Avenue was blocked off, so you had to go around the entire block to get somewhere. We stayed inside and ordered lunch to be delivered to us from a few joints downstairs, which offer food for workers and tourists.

I started walking around outside at 1:30 PM, an extended lunch so-to-speak. Press and videographers were accumulated outside but most of them must have already moved on to a different event. Tourists were lead to the top again but only in the company of permitted ticket sellers. The overall flow started picking up. At 5:30 PM sharp I exited the building and 5th Avenue was back into business. No more crime scene tape, no more cops. It is amazing how fast things go back to “normal” here in New York.

The thoughts taken with from that one memorable Friday are easily summarized: First, even though this incident had nothing to do with terrorism, the Empire State Building remains most likely a top target. Second, the area is busy and overpopulated and police officers were at the scene in less than a reasonable time frame. Third, you never know what tomorrow brings. 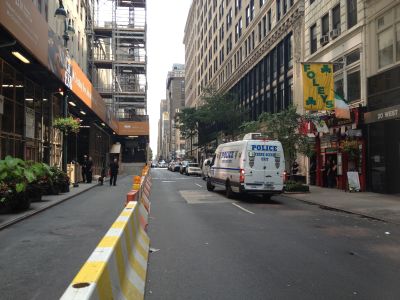 (If the story has not outlined it yet, I work in the Empire State Building on the 27th Floor and am giving you an inside view)