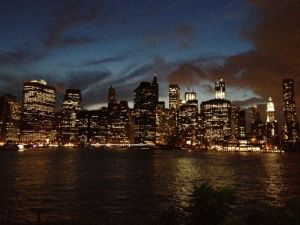 It’s always an experience to get back to this city even when gone for just a few days. Every time I witness my return differently. Mostly I am not at all pleased but sometimes I am happy to be back. Yet, coming back from Canada was different in so many ways. When I saw the skyline from far away, I was thankful at once. Away from the awful greyhound bus, away from the travel on the bumpy road. It almost felt like home to embrace a city I’ve been in for so long. Home – a very tangible word.

However, my initial euphoria changed quickly after entering the subway. First, the endless wait for an express train at 3 AM around Times Square. I had forgotten how drunken people can act on a Tuesday morning out. Being stared at by random guys when you absolutely do not feel like meanly glancing back at them until they finally look away. On top of this, of course the N-Train that decided to switch over to the R on the last stop in Manhattan. The long walk over from Canal Street to where the Q stops. Having the Q shut its door right in my face. Fidgeting around for another eternity. It takes some long 20 minutes for another train to come when it’s the middle of the night.

Looking up when an aggressive group of teenagers walks up to you and the rest of the tired commuters. Spanish yelling, waving of the arms from their side. Everyone is staring in disbelieve rather than reacting sensibly. I even got pushed by one of the mildly overweight Puerto Rican girls. At least she said “excuse me” after striking my upper body. I was too startled to think of much to do. I thought it rather a bad idea to pick a fight with a group of four when all I have to defend myself is my heavy bag of souvenirs. So many underage people out on the streets and of course I ran into another group of chicks on the train, once it came. This time I kept my calm. Ten minutes later I was finally home. The thought I had when falling into bed was that this city is hideous, the people have ugly personalities and I want to get out of here right now. 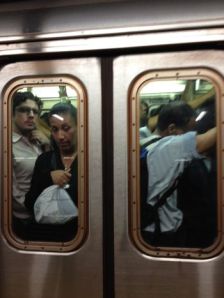 The next morning. A beautiful day. The people still being a bit weird but manageable. I felt more like an anonymous commuter that day than someone who has to stand up for herself in New York. Peace of mind. But the ride back home complete chaos – again. A tunnel in Brooklyn that decided to catch fire, leaving the entire subway system turned upside down. Walking down the steps to the Herald Square underground I started wondering why there were more masses than usual accumulated on the platform. The B and the D were only running to W4. Even after heading over to the N and the Q, I was in no luck. The first one stopped, spat out a chunk of evening commuters and then announced it would be backtracking straight to Times Square (42nd St). The R came and announced that 14th -Union Square was its final stop (it usually runs to Bay Ridge). No one knew what to do. I decided to squeeze into an overpopulated subway car and try my luck towards downtown. I gave up after being held in 23rd St for ten minutes straight. A crackly voice over the intercom blared that all trains were currently held in the station due to the high volume of traffic ahead of us. I was one freaking stop away! And then the conductor laughed into the speaker. He actually cracked up! It made me smile. If people can still make fun of such an absurd situation, no matter how vicious their intentions are, you still have to see the comic of the circumstances. And how ridiculous is it to be stuck in Manhattan on a random weekday? Squeezed against hundreds of other commuters? I got off and wandered the streets of the Flatiron district. Eventually I made it to the 4 and 5, which thankfully ran underground and were unaffected by the sudden fire in Downtown Brooklyn. Of course a few other people had also been forced to dodge towards this alternative. I have seldom felt so happy to get off the train than during this day. Atlantic Ave was jam-packed with masses. And I’ve seen it during a normal rush hour; yesterday was three times as many people. 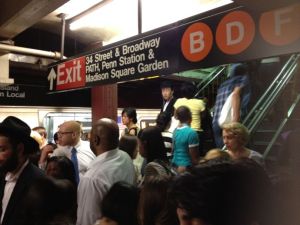 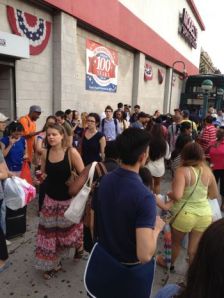 Today I was more confident in the way of how to handle matters. I didn’t feel like an awkward piece sticking out of the grey masses of the City trying to fit in. Today I actually did fit in. And instead of feeling frustrated as I had before this trip, a different feeling overcame me. Happiness comes when least expected. It may come when you are sitting under a roof of leaves in Madison Square Park, clutching an umbrella with one hand, writing your thoughts down with the other. It may also come when jumping from puddle to puddle, finding your reflection in one of those. It’s an abstract concept but it brings back the memory of a time when everything used to be easier.