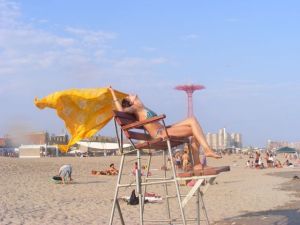 Yes, you guessed right! Only one more post to go to fulfill the annual four-seasons- series. So far I’ve talked about the months from October to May. What else could be amiss then what is going on right now?

While spring and fall only last a few weeks if even a month, it’s up to summer and winter to make out the extreme and long-lasting times of the year. I have never experienced such a long summer as I have here (and the same can be said about winter, of course, but let’s not go there). Beach time from mid-May to September. Hot temperatures from June on. Even though most people seem to loathe the heat and cannot see the beauty of the so-called Dog Days from July on, I almost embrace them. After so many disappointing summers in Germany, the heat has been a welcoming change. Instead of windy and rainy weeks, which usually never turned into what I wanted them to, New York has given me just the right amount of sunshine I could possibly ever want. My desperate tries to catch a tan at one of Deutschland’s man-made lakes have been exchanged by long beach days at the Atlantic Ocean. No need to carry a jacket with you in the evening as the heat still lingers between skyscrapers all day and night long. The last two summers I have even made it through the humidity and sweat without an air conditioner. This year I gave up and crawled to Target to have one set up.
And even though this sounds like an incredibly hot season to bear, it really is not too bad. I’ve had worse down in Florida, where you truly have to hop from building to car, from car to building in order to avoid major sun burns. I believe the Northeast has found a great balance in being very hot but not hazardously burning during this time of year.

Of course there are also aspects that annoy me when it comes to summer. The way strands of my hair stick out to all sides once humidity reaches the dreaded 80 percent. But I carry my sun bleached strands with pride. They are a proof of many successful beach days and hours in the park. I have been able to dip them into salty cool water and have them washed out by sun and sea water. Accomplishing this without even going to an exotic location such as Spain or Italy – what a great feeling this is indeed!
And then the heat in the subway once you enter the underground. Boy, how all your efforts of looking good can be destroyed by a mere 5 minutes of standing in this boiling part underneath the City. Of course there is not much you can do about it other than sucking it up and trying to force a smile on your lips when your make-up is smeared by sweat and heat and your hair style has been effortlessly destroyed. Not to mention the cranked up air conditioners in the stores and offices. But you also have these during the winter, so I am not going to pin this one solely on summer!

New York offers an incredible array of things to do during this season. While spring has already kicked off a few events, summer is truly when this city comes to a full awakening. Band Shell music in Prospect Park from June to July. Further Open-air-concerts at the Summer Stage. Shakespearean plays in Central Park. Free movies screened outdoors beneath the Brooklyn Bridge and in Bryant Park. Operas shown at the Lincoln center and, and, and… And the best part about all of these outdoor events: They are for free! They cost zero. Nada! Null!

The Big Apple’s cultural list of things to do during the warm months is about to explode. And if you ever find yourself bored with any of these, you still have events at a low-cost to attend. Such as the Bi-annual Jazz fest on Governors Island. Or a boat tour on the Hudson River. Or you can simply take the train to one of Long islands fancy beaches ( Long beach, Fire Island, the Hamptons – the list goes on). Not that you really have to. You can go surfing right here, at Far Rockaway in Queens (and get badly burned if you don’t watch it).

Beergarden outdoors. Brunches outside. The Eurocup, Fourth of July, and Labor Day! Yes, summer is simply amazing in the city of 8 million!

6 thoughts on “Life Is Alive in Summer”