Second destination: Heidelberg. Some two and a half eventful days in the medieval city of Germany and still enough time to see a handful of friends – I am very proud of myself!
I used to live here for roughly two and a half years when I was a student and before I moved to New York. One thing I can definitely say is that I have lost my heart in Heidelberg. Its old buildings, its peaceful but refreshing vibes when walking in the Altstadt and its interesting events still capture my interest from so far away.

It is also close to several bigger cities, such as Mannheim (20 mins drive), Frankfurt (1 hour by car), Speyer with its Dom and famous wine fest in September (30 mins drive), and Strassbourg/ France (1 ½ hours by train, possibly less by car). It doesn’t take too long to hit up Paris when you use the ICE, as I had a great 3-hour-ride once on the train from HD to the French capital.

Heidelberg came into existence around 500 A.D. It has a castle, which I have talked about extensively in my last post back in September (read more here). It also has an old bridge which was, sad to say, destroyed during the big wars in the 20iest century but has been rebuilt thereafter. From the Philosopher’s Way you have a splendid view on Heidelberg. The city looks just like a doll house – as I have heard a native tourist guide describe it to his faithful listeners.

Even though I already took a good amount of pictures the last time I was there, I just couldn’t help it but shoot an entire new batch in April. The city has its own appeal during spring. The flowers that have just started blooming. Then the gorgeous weather, which I was lucky enough to have. A warm 21 Centigrade/ 70 Fahrenheit during my stay there, what more could I wish for?!
Supposedly, there is something new coming up called the Heidelberger Frühling – the Heidelberg Spring. I guess it is competing with the Heidelberger Herbst, which is the annual Heidelberg fall fest each September. My friend says it is mostly about all the stores being open until midnight but she does not know for sure if bands are playing in the old part of the city. Guess I will have to wait for her to tell me once it comes around. We already saw a bunch of green banners surrounding the bridges and advertising for this event.

Heidelberg is a student city. A high percentage of people (temporarily) living there are between the ages of 19 and 29 when walking the streets. It has several campuses and numerous universities, schools for higher education and private institutions – it is quite insane for a city of that size. The main university has been around since 1386. It is also considered an elite school and well known throughout the country because it is the oldest university of Germany. I know that parts of its campus is in the old part of town called Altstadt and in the Neuhenheimer Feld, which is an area across the bridge and kind of isolated from the rest of town. Since some of the dorms are located there it has become rejuvenated because of the high amount of students. The zoo is close to all of this, as well. Although the college kids, I am sure, can pose a zoo of their own, if they want to.

During those two and a half days I got to finally see my friend’s newborn child. Her five month old son is as gorgeous as she and a very active fellow. It was just the right weather to take a stroll down to the Neckarwiese. This is the lawn beneath the bridges and along the river Neckar, which flows through Heidelberg. As soon as the weather changes to spring and summer, people bring their picnic blankets and BBQ with them to have a good time here. My friend lives about five minutes walking distance away from one of the bridges – truly an ideal place to have a child with a baby buggy. 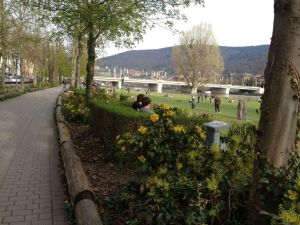 I also got to see some old folks I used to study with and people I used to work with during my innocent student years.

And then, surprisingly, I had a good talk with another blogger, who happened to move to Heidelberg just in November of last year. Amanda and her husband took the time to meet up with me at Café Gecko and stayed for a very long time considering the waking hours her hubby has to endure. This had been my very first time I met with someone I had only known through the virtual world and it was nice to see how they had adjusted to the new world. I hope you get to do some more fun traveling during your time there and that you also get your passport before you leave again, Amanda… 😉

A drunken night followed at the popular bar mile called Untere Straße with friends and acquaintances, which made us stay out until 2 AM. So far the longest I’ve managed to stay out on a Tuesday night in HD. The evening was well spent at a joint called the Reichsapfel. They offer a shot called Apfel Apfel – apple liqueur served with a slice of apple on top of it. The Untere Straße is a street where you can find one bar next to another. They are open every day, mostly until midnight or 2 AM (longer during the weekend and on Thursday). Bar culture in this town is very specific as you don’t find the usual drunk heads you would in smaller German villages, but a mixed crowd of (how could it else be) students, suit guys, and tourists trying to have a good time. Aside from two Irish pubs further down in the Altstadt, you also find a good deal of Americans here. Mostly GI’s or their spouses and family, who want to enjoy their time in Deutschland. On the weekends it can get out of hand with several dangerous bar fights and other happenings, that’s why you find many police cars patrolling the streets and being on a watch.

Altogether I would say I had an eventful time, but I probably would like to be there for at least one additional day. Even after having lived there and just coming back for a visit, there is still so much to see and many more people to catch up with. A short trip is almost impossible to digest.

Viva la Heidelberg, you will most likely always be on my list of places to visit whenever I am back home.

[For more pictures, go to A Picture Every Day: Beautiful Heidelberg.]

12 thoughts on “To Lose Your Heart in Heidelberg”