They come in all sizes. They come in all shapes. To some they are a necessary accessory, to others a die-hard friend. Sometimes they are owned, other times the streets own them. Whatever the matter, one thing is for sure: You cannot avoid the PETS OF NEW YORK!

People in New York are surprisingly open to having pets. When looking for a room, I encountered many candidates who were living with cats, dogs, or other animals and were happy to room with other fellow pet owners.

Now I myself have not owned a pet in my adult life. My family had the cutest dog in the world but unfortunately she had to be put to sleep when I was 13. Such is life, and ever since then I have not considered living with animals for various reasons (mostly the cost and expenses connected to them I couldn’t afford with my student allowance).

However, the first apartment deal I landed over here was coincidentally with a girl who was very much into pets. Little did I know when I saw the first cat peek around the sofa that I would get myself into living not only with one cat, not even with two cats, but with three cats at once (in addition to the two roommates already there). As it turns out, these cats were the cutest entertainment I had during some lonely days and nights.
It took me about a week to get used to them and to find out that, indeed, they do not resemble dogs in the slightest manner, as they ignored my pathetic attempts of calling their name and expecting them to show up. We got along quite well and I was especially fond of one: A striped, tiger-like monster with the name of Sweet Pea. She was the sister of a black cat who, nicely phrased, was a bit on the heavy side. Or, as my friend had the nerve to point out, was obviously fighting obesity, but who would ever blame the poor cat for this. He and Sweet Pea were always in a hurry to diss the third cat: A shy, undernourished fella my roomie had picked up from the streets. The Stray Cat did not let anyone come closer than two feet, even after having been fed by her master for well over a year and living in her apartment for about the same amount of time. However, the other two siblings thought it most amusing to chase the Stray Cat around and not leave her alone until they were both tired of running after her.

Soon after this I moved to an apartment that didn’t host any pets. But rather sooner than later my roomie got a hamster, or rather a dwarf hamster: A tiny, gray fur ball which was nagging on everything in its cage and began snapping at our fingers from an early stage on. I guess some people thought it funny to compare this little monster to a mouse or a rat, but, truth being told, I really do not know the difference as I am unsure what to do with a hamster. He rolls around in a ball sometimes and works his wheel in the middle of the night (which happens to be the time all of us like to sleep), but it’s not like he offers comfort or a shaky paw when we need it. To date our hamster still has no name. Heck, we can’t even decide if this pet is a male or female, as the store owner sold it to the Roomie as a male but my Austrian friend is convinced it is a female. He even took pictures of “her” and showed them around to various experts to get a second opinion on this matter. However, the others are used to the idea of calling him a “he.” An inexplicable disaster, really!

The Wonderful Elena once asked us to watch her cat while she was off exploring the West Coast and we hosted Simba for one entire week. During this time he made contact with our little monster which furiously bit Simba’s paw and attempted to snap his nose off if he dare stuck it into the cage again. It was quite a funny sight: The big cat scared of the little hamster (as it kinda gave the situation a Tom and Jerry feel)! Aside from being afraid of the dwarf hamster, Simba liked to hide in Trader Joe’s paper bags when they were empty and he loved to wake us up at the mysterious hour of 6:10 AM – every single morning. He was such a cutie, though, and a very mellow fellow, not scratchy, bitey, or mean in any way! It made us think of getting a cat ourselves, but then our plans sorta fell apart once he was gone… 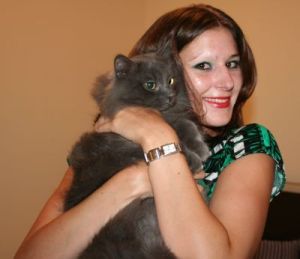 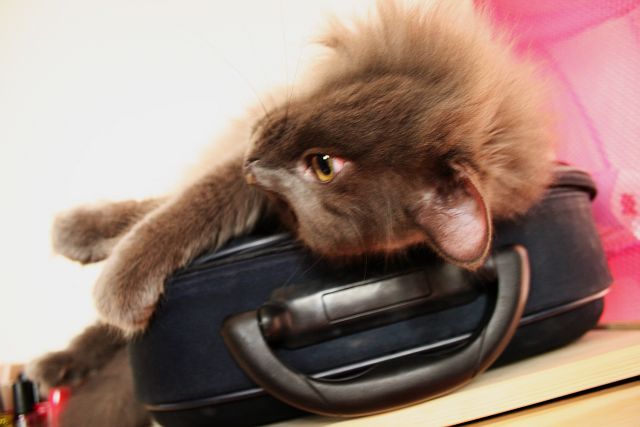 Now, you might wonder why I haven’t mentioned dogs yet? Because dogs are a pain to look at in New York! I feel that it is a torture to have a huge mastiff running around on the hard cements of the City or a Yorkshire terrier poop on the gray streets of Brooklyn. Dogs want to be free, they want to be owned by farmers, they want to chase rabbits, they want to run around in a forest and be bitten by ticks. They do not want to be dog-trained on a leash and avoid other dogs, they do not want to poop on a man-made road, they do not want to be locked away in tiny apartments no one can afford.
Even if they go to the park once in while, it doesn’t seem like the real thing or an animal-friendly compromise. Cats are fine to entertain inside, even though they want to go outside, too. But dogs, no, I cannot look at dogs in New York anymore without feeling compassion or hurt.

To see things a bit from the bright side, at least New Yorkers are willing to care for a creature other than themselves. I believe it crucial for especially older people to turn to some living animal for comfort and company. And sometimes it is good to have this normal life with a pet: Somebody who is waiting for you when you enter your door and who cannot hide his excitement when being stroked by you.

Yes, the pets of New York: Good this city has you, it would be one lonely place without you fellas!

5 thoughts on “Pets in New York”