Ice-cold guiness. Stiff Brits. Centuries of history to digest!
My trip to London was about as eventful as it was confusing, as impressive as it was intimidating, as much fun as it was sad to leave again. To date I still ask myself how stupid I was to dedicate only 4 days in the Brit-Capital, whereas one week wouldn’t have been enough, but at least I got to see the metropolis before I returned to the American continent, which had really been one of my long-burried dreams. As you might recall, I was curious to know how London’s 8 million citizens compared to New York’s 8 million inhabitants. After being there and seeing it, I still can’t give you a satisfying answer to this.

The general impression I got from the crowd on the tube, in the bars, on the streets, during tours and sight-seeing was simple: Brits might seem stiff at first, with their fancy little suits, dressed-up attitude, and carefully highlighted hair but they are really nice and polite people. The generation I was digging the most were the people above 60 years of age, for I consider them the true gentleladies and gentlemen. It has some sort of appeal talking to these old veterans when standing in a line to a supermarket and trying to figure out their opinion on various countries or on their perspective of London. I issue a special thanks to the very patient couple at Ryanair airport who didn’t grow tired of repeating the innumerable ways of transport from Stansted to the city and getting around the city centre. The same goes to the lady employed by the National Rail who repeatedly mentioned several tube names and stations I had to take to get to my destination (she was in her 30ies, so I guess generations are irrelevant).

Completely disorganized I had failed to look at a map before I entered the country, so I was a bit at a loss at the airport already. When my flight arrived an hour too late, the clock showed 8 PM and taking a bus or shuttle was not really a comfortable choice for me anymore. My friend was supposed to meet me around Russell Square, so I waged my options and took a fast train towards the Tottenham Hale stop. From there it was easy to take a tube to named square and all I had to do is wait until the Brit picked me up, for I was completely unsure which street to take from there on (I had finally managed to get a hold of a subway map but still didn’t own a map of London’s street names and crossings). He was very nice, this guy, and gladly walked me to the hostel I was staying at: The Generator Hostel!

I spent a total of three nights here and my first impression hasn’t been taunted by the following impressions I gained over the course of time: A huge building hosting around 1000 people from all walks of life but youngsters being the majority, constituting a haven for parties, booze, and fun. I don’t really stay in hostels too often. This had been my fourth one (yes, despite me liking to travel). I shared a room with 9 other people and I have to say that it worked out quite well. The first night I came home I was greeted by two Italian guys and the three of us were trying to pull our stuff from underneath the bed without waking the others (lights were turned off). The flashes of our cell phones in our hands, wandering across bed sheets and sleepy faces, must have looked about as spooky as it must have been hilarious to an outsider. Then there was this 70-something man staying in our room who had to go back to London once every six months for extending his visa to India. After his retirement he had made it out to Goa and I could have listened to his picturesque descriptions about the beaches, people, food, and life style forever. I also really hope the Argentinean girl made it to her next destination safe and sound, and maybe she will have a great stay in the Big Apple next year. What was truly surprising to me, even though I had mastered three other hostel experiences before, was the randomness of groups of suited-up individuals in their 30ies or even 40ies, who had obviously rented out a room and were staying in a YOUTH hostel. Maybe I should become as open-minded as they when I am in my 40ies.

My first night out was already an accumulation of London’s exotic diversity in terms of cuisine: The Brit invited me for an ice-cold guiness at a local bar (I have to admit it truly tastes amazing when ice cold) and then we went for Indian dinner in the Soho area (forgive me if I am wrong, as I didn’t really have the areas right during my first stay). Even though this restaurant was not high-class it looked pretty fancy from the outside – a misperception, as my friend pointed out, but I was still thrilled to dine in such an environment. After ordering one main dish and splitting an appetizer, which I could of course not finish, I was really carried away at how fine Indian dishes taste in London and I doubt I will be able to eat this authentic anywhere else (the same goes for Mexican food outside of Cali and Mexico). We ended the night with a late-night beer at a typical Irish bar called O’Neill’s, before we got kicked out at 11PM already. Yep, they stick to those closing times, the Brits! But to be honest, I was dumb-founded at the speed the drinks were devoured and poured into booze-hungry throats so that I am not too surprised when seeing stumbling Brits at 10 PM in New York anymore. I guess they have a different understanding of enjoying a drink or two, these Islanders, and our pathetic New York day-time-drinking won’t measure up to their standards.

First night over, first real day to start: Sight-seeing! I knew my time was extremely limited as soon as I finally opened up a real map I had obtained at the hostel reception. Boy! I was pretty glad to see my “babysitter” for lunch again, as I was desperate to ask him for the hotspots I could see during the following two real days. Well, first I went off to King’s Cross and St. Pancras, a nice hotel built next to the station. Harry Potter’s 9 ¾ platform is a bit disappointing, I dare say, and Kings’ Cross looks like a normal train station, but I just had to check it out.
Russell Square, on the other hand, is a nice area to stay, as it is central to the tube and buses that take you almost anywhere. From there you can also comfortably walk to the center of the fun, meaning to Soho, Piccadilly Circus, and the rest of the entertainment. I think I would stay here again if I had the choice. 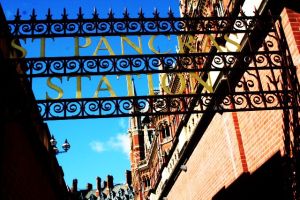 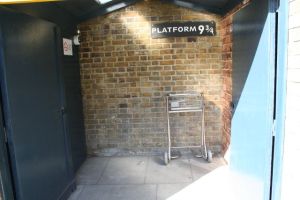 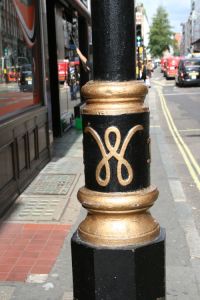 After exploring several parts of Soho already, and stumbling over the ultimate Toni & Guy salon (unintentionally but when I did I just had to peek in), I met the Brit for British lunch: Fish and Chips.

So this is the deal: You can’t just stuff a French fry into your mouth and shove the fish after. You have to carefully pour vinegar over the entire dish, dip the fish into the tartar sauce and then indulge in what isn’t bad at all. I like it! I only had it once but that one time was very convincing! While being distracted by London’s bar culture during lunch, my friend circled a few areas I should see and handed me the map. First it went off to Chinatown, which I have to say is prettier than New York’s Chinatown. And Chinese people do speak English there; unlike in the Big Apple, where you can get around on your Mandarin or whatever other dialect you’re speaking. I took these nice shots after a short rain shower (I noticed these tend to happen at 3PM in the afternoon). 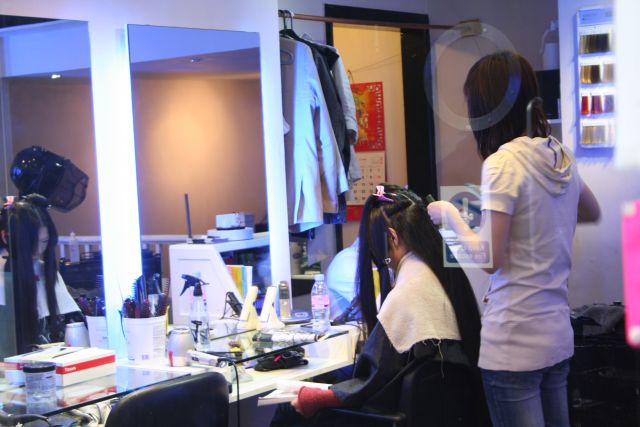 3 thoughts on “London in a Nutshell (Part I – Of Course)”